Just in case you were looking for the blog, it’s the far right “tab” on top.

Bay Island Bonsai is a Northern California organization founded in 1998 by Boon Manakitivipart. The organization came into being out of Boon’s desire to improve standards in bonsai, to produce a bonsai exhibit, and to establish a group of dedicated bonsai artists who could work and learn together.

Since its founding, Bay Island Bonsai has been open to all bonsai enthusiasts in the greater Bay Area that are dedicated to learning bonsai. The purpose of Bay Island Bonsai is to teach its members to recognize, create, and maintain high quality bonsai.

Members of all abilities are encouraged to gain competence in the art as quickly as possible and achieve this through regular meetings, hands-on workshops, and the careful study of bonsai display. Each winter Bay Island Bonsai members demonstrate their knowledge by staging a memorable show, “An Exhibit of Fine Bonsai.”

After studying bonsai for more than ten years, Boon Manakitivipart had learned a lot about caring for and styling bonsai. Returning from a year of work in Japan as a formal bonsai apprentice, Boon wanted to share more of what he had learned. He also dreamed about hosting a bonsai exhibit that demonstrated the principles of formal bonsai display. Boon found he could satisfy both of these desires by forming a group of dedicated bonsai students that together could produce a quality show.

After conferring with friends, colleagues and bonsai students, Boon assembled a group of five to be Bay Island Bonsai’s founding members. On June 24, 1998, Bay Island Bonsai held its first meeting in Alameda, California with Boon as sensei, Morten Wellhaven as president, and Janet Roth, Jonas Dupuich and Darrel Wong as the initial advisory board. Shortly after its founding, Bay Island Bonsai became a member of the Golden State Bonsai Federation. 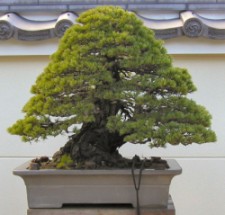 Boon thought of the name “Bay Island Bonsai” and designed its logo, a flower based loosely on the sakura (cherry) blossom, with the letters “BIB” at its center. The sakura has been the symbol for the samurai spirit for centuries. Boon’s hope is for Bay Island Bonsai’s ideals to reflect the sakura’s associations with dedication, strength and gentleness.

On January 22-23, 2000, Bay Island Bonsai members hosted their first show, “An Exhibit of Fine Bonsai,” at Centennial Hall in Hayward, California. The show received warm acclaim from the local bonsai community and attracted several hundred enthusiasts from across California. 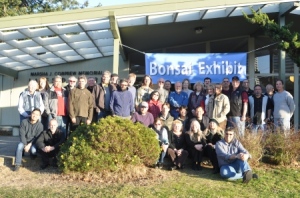 Bay Island Bonsai holds its show in winter because its members believe that is when many bonsai look their best. Winter allows viewers to see pines between growing seasons, early blossoms on flowering cherries, and the well developed branches of deciduous varieties.

To keep their show interesting from year to year, Bay Island Bonsai members refrain from exhibiting the same trees in consecutive shows. This way, when a tree returns to the show after at least two years, the tree will have a different, and hopefully improved, appearance.

Although it has a president and an advisory board, Bay Island Bonsai remains politics free because Boon makes all of the important decisions. In return, Boon expects members to participate in all Bay Island Bonsai events-especially the annual show. As a result, membership continues to grow. Bay Island Bonsai always welcomes new members-whether dedicated beginners or advanced artists-who are serious about improving their bonsai skills, learning about bonsai display, and participating in monthly meetings, workshops and special events.