Posted on August 28, 2017 | Comments Off on Cutback, Bending, and Improving a White Pine

A happy and healthy White Pine is about to be cut back and improved. The lower part of the cascade is not very interesting so the decision was made to bend it further. You can see in the final picture that a piece of rebar is used to hold the new bend. The result is that the cascade is longer. Now, it extends below the pot. Give it a year to fill in and it should be show ready – in a slightly smaller pot.

Comments Off on Cutback, Bending, and Improving a White Pine

Rose as a Bonsai

Time passes both for us and our bonsai. If we do it right we will all grown cragged, older and with a lot of character, a lot like this rose bonsai. And the older our backs get, the easier it is to like this rose.

Bonsai Born in the USA

January 18-19, 2014 will be different. Boon asked his club members to only show bonsai started in the Unites states for our 15 year anniversary show. That means bonsai mostly started in California. He felt that as a club, we could put on a really good show with only locally produced bonsai. It is a bit of a statement about what can be done locally with some good bonsai education. 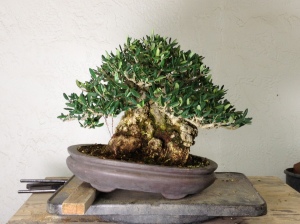 Members were exited about this kind of anniversary show until they thought about Shohin bonsai. Most great Shohin were imports in the past. But Boon said, “Don’t worry. I have confidence in this club. We will have a quality Shohin section.” (I guess all of you who show up will be the judge of that.)

Comments Off on Bonsai Born in the USA